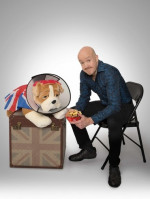 What’s your most memorable heckle?
It happened at my first ever stand-up gig and I dropped the piece of paper I had written with the jokes on. A lady in the front row picked it up and gave it back to me saying “Keep going – you’re doing really well”. That’s a heckle you can deal with.

Where do you go for your pre/post Leicester Square Theatre gig food?
My last LST show was the end of a national tour so we went to celebrate at the Trafalgar Hotel nearby which is plush, surprisingly uncrowded for central London and does some banging cocktails.

What’s one word to describe the state of the UK?
Temporary

Who’s the best upcoming performer in the country that we haven’t heard of?
Apologies - I suspect I won’t have heard of them either.

Has lockdown influenced your material? If not, why?
Masks, sanitisers, gaps in the audience because ticketholders are having to self-isolate, audience members coughing and people nearby shifting uneasily… you’d have to pretty impressively insulated from reality not to mention it. And a mask is a heckler’s friend – you keep your head still, it’s very hard to work out who’s shouting out.

Who would you describe as your arch-nemesis?
Sprouts

When was the time you bombed the most onstage?
I was once doing a double-act and one of our microphones worked and the other didn’t – so you could hear the set-up but were struggling to hear the punchline. Somebody shouted “Fuck Off” and I said “We’re only going if the whole audience want us to go”. I had sadly misjudged the room.

What’s been your strangest fan encounter?
I once got on the first Tube of the day having been partying all night and was feeling decidedly grim. I had just started to host my first ever TV panel show and some girl recognised me and started excitingly pointing and shouting. I had to quickly exit the Tube and find a suitable place to be quietly ill.

Where’s your favourite place to tour?
The Birmingham and South Wales audiences always seem the most excited to be out.

How do you like to relax after a gig?
Plush Green Room. Friends. Unlimited hospitality. No time limit. Taxi home.

What’s the one thing you want the audience to take away from your show?
Having loved the show but to not be able to remember any of the jokes.

Who would win in a fight: Badger or Baboon?
Given that they are omnivores, I reckon they’d both think it wasn’t worth it and settle for some insects and berries.

What’s the oddest thing you’ve overheard in London?
I think that comedian-bloke has just nipped off the Tube to be sick.