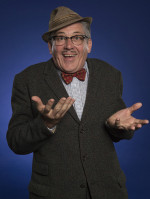 ''At every turn, his performance gives us something to marvel at' - Brian Logan, The Guardian

‘I want my money back!’ I shouted it at John Bishop.

I don’t eat prior to performance because most things repeat on me and the last thing I want is to be belching my way through a show. Afterwards, I’ll probably go to The Ritz, if they’ll let me in, and have Eggs Benedict or a sausage sandwich.

I’d like Priti Patel to marry Andrew Neil and I’d avoid Piers Morgan. In fact I’d avoid all three of the idiots.

A young man called Barry Cryer. Look out for him! He’s going places. And I don’t just mean the betting shop.

Next doors cat. I’ve only got to take one more photo of it doing it’s mess on my grass, then I can take it to court.

All my fans are strange. Have you seen them?

A stage. In a place. With people there, preferably. And a bar. In fact, just a bar.

Watch a bit of television back at the hotel. They usually stick a Jean-Claude-van-Damme-film-on-at-2-in-the-morning. That usually puts me to sleep.

I don’t want them to take anything away. Just leave the theatre quietly with what they came with.

Depends on the situation. I can see some merit in having both. Though not at the same time. Obviously. That would be stupid.

How do I know? I’m not David Attenborough. The Budgie?