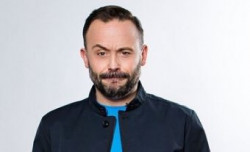 'Sets himself apart from the liberal commentariat with a sharp self-knowing wit ****' Dominic Maxwell, The Times

Stop swearing Geoffrey, I brought you up better than that. (My mum, at a gig in Wimbledon…and she didn’t)

I have a long love affair with Colonel Sanders. Maybe it’s a south London thing, but I love fried chicken. I’m in my mid-forties now so I’m sensible. I’ll sometimes have a zinger burger before for chicken and a little bit of carbs, then some hot wings after. Then some Gaviscon, probably.

Brilliant…it’s amazing how easy it is to be a contrarian in comedy.

You may well have heard of her, but Joanne McNally is the real deal. People who are very good at stand-up sometimes take longer to break through in this curious industry of ours. But she has funny bones and is seriously blunt – exactly how stand up should be. She also looks like she could beat me up in a fight, which might be why I’m saying this.

Not lockdown as such, but the political climate. It’s been weird to find out how many people essentially want the state to tuck them in and turn out the lights. I’m not saying the lockdowns didn’t have benefits, but some people were a little bit too keen. Especially those weird middle-class people, who seemed to take it as nature’s sabbatical. I think anyone who boasted about ‘saving money on the commute’ should have to pay extra income tax.

Myself. Pretentious answer I know, but if I start a gig well there’s always a voice going ‘Well, well, well, only an idiot would mess this up now.’ I’m like my own bad parent.

I once got slow-handclapped in Brighton, and not for the reasons you might think. It was nothing to do with my politics and everything to do with how deeply unfunny I was being. At one point I came down off the stage and managed to hook the mic lead around a women’s head. As you can imagine it didn’t help win the audience around.

I got asked to sign a boob at Butlins Skegness and I can assure you it was even more glamorous than it looks written down. However, in the current climate I was careful to make sure only the pen made contact.

I love pulling a decent crowd up North. Given my politics and the fact I’m a Londoner, it feels like it shouldn’t happen. A bit like, I don’t know, the Tories winning seats in the red wall.

In middle-age I’ve taken to eating ice-cream every night. Not only is it great for my BMI but I also get strange looks from women at petrol stations wondering why this geezer is eating a cornetto at 2am.

I just want them to be entertained and laugh. It sounds old school, but that’s my main intention, it just happens that for me politics and social commentary is my way of getting them to that point. I wouldn’t feel like I’d done my job if they left saying ‘He wasn’t funny but by god he made some good points.’