Thanks everyone who streamed Cracking Comedy in aid of @WCF_UK! Here’s James Acaster mid hat-tip by @edshots 📸 Check out the rest of his photos on our insta! (@nextupcomedy) https://t.co/XTfyykbley

ONSALE NOW: The Psychology of Serial Killers Join forensics lecturer Jennifer Rees to explore one of Forensic Psychology’s most troubling topics. Debunk myths, and find out how common it is to have homicidal fantasies... 13th Nov - tickets👇 https://t.co/O1sUFy294C https://t.co/vTZa50E6YO

Not long to go until The Whoreing Twenties! These fearless trailblazers aren't scared to defy the patriarchy and tear down barriers in comedy. Get real about being female in the modern world! 3rd June - tickets here 👇 https://t.co/hFgGfpzXRA https://t.co/qmOIAP1r83

STOP IN THE NAME OF LOVE! The Diana Ross Story is onsale now! Featuring classic tunes such as "Ain't No Mountain High Enough" and "You Can't Hurry Love", this is one of the greatest musical stories ever told. 22nd-23rd Jan 2023 Tickets here: https://t.co/Y6HrF2MZO7 https://t.co/aSaFu97piH

The story of an allied spy dropped into occupied France, who was told to take on another identity so became a drag queen, entertaining Nazi Officers and gathering information. For Queen And Country - THIS SUNDAY! 👇 https://t.co/ydRVoabZV1 https://t.co/N14F1xVZQk 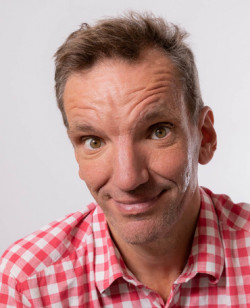 A Leicester Square Theatre favourite with recent television and radio appearances including:

Have I Got News For You - BBC1

Live At The Apollo - BBC2

1.    What’s your most memorable heckle?

I don't get heckled much as audiences know I've sat down and written a show for them. Saying that, calling my previous tour Get On With It was a bit of an own goal as that was just too obvious a heckle.

2.    Where do you go for your pre/post Leicester Square Theatre gig food?

I try not to eat after but before it's nice to go to Mildreds or Vantra for a nice vegan meal.

Avoid at all costs: Piers Morgan

5.    Who’s the best upcoming performer in the country that we haven’t heard of?

If you haven't heard of them I probably haven't either.

6.    Has lockdown influenced your material? If not, why?

It has. It'll All Come Out In The Wash is an unbiased look at the Covid crisis.

7.    Who would you describe as your arch-nemesis?

8.    When was the time you bombed the most onstage?

Plenty to choose from in the early years. It's important to work out why it happened and how to deal with it differently when you're in a similar situation again. That's what it's all about.

9.    What’s been your strangest fan encounter?

Being asked to record a video birthday message for Olympian Steve Cram.

10.  Where’s your favourite place to tour?

As a keen Viz reader I like the North-East but it's good everywhere. Maybe with the exception of Liverpool.

On a Saturday or Sunday it's straight back to the hotel for Match Of The Day. Failing that, go to bed.

12.  What’s the one thing you want the audience to take away from your show?

I haven't given this much thought. A baboon would be able to get away more easily and could probably just drop stuff on the badger. Baboon it is.

In the toilets at Millwall's New Den. "Are you coming on Wednesday?" "Nah, my trial's that day."