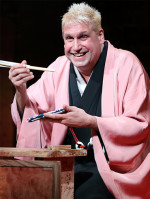 “There is only one Sunshine!” The New Yorker

“The King of Kimono Comedy!” Reuters

Great question. Before I was well known in Japan people were surprised to see a blond Rakugo storyteller. When we perform Rakugo we kneel on a cushion in a position that is famously uncomfortable for non-Japanese. Once I was performing and as I sat down and bowed to start my story, a lady in the audience said more loudly than she perhaps realized, "Oh! He actually kneeled down!" I looked up at her and answered, "Madam, I am a professional Rakugo storyteller. Kneeling down like this is part of my job. Kneeling down is not a problem for me. Now, getting back up at the end of my set - that's another story!

So Restaurant owned by my dear friend and great sponsor, Tetsuro Hama

Had to look up Priti Patel - definitely snog!

The pandemic has given me material, so yes. Also have gotten used to performing online. But a break from live performance on Broadway gave me the time to launch my Japanese Denim Kimono fashion line - so the time definitely did not go to waste!

Right now there is nobody doing what I am in New York or London, so for better or worse, MYSELF!

Right after my Rakugo apprenticeship ended, for about two years, constantly...

Two super attractive 30 something ladies came up to me after a show at Leicester Square Theatre, giddy, bubbly, asking to take a picture and sign my autograph. I felt like a superstar. As they left they said, "Thank you so much Sunshine. Our parents are huge fans - they will be delighted that we met you..."

In a local bar close to the theatre with new friends. (Sorry - boring answer but true...)

I hope that they come for an evening of laughter and leave with a piece of Japan in their hearts. (Sorry, that might be two things.)

Wow. You are throwing difficult questions at me here.

Do these animals fight? Might want to ask them... I would try to step in and get them to work out their differences.

As a Canadian, I find it really hard to tell when my London friends are being straight or ironic. So even if I did overhear something odd, I doubt I would recognize it as any odder than everything I hear in London.