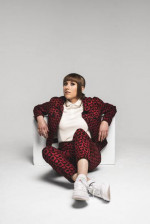 "Her jokes were spot on, her stories magnificent and magnificently told." - Bruce Dessau

"There's no denying that Maisie Adam is phenomenal" The Scotsman

Make Mine on Dean Street does brilliant sandwiches if I'm in a hurry, but if I've got a bit of time, I love Bancone - it does the best pasta, and is only a 5 minute walk away - though you don't want to walk anywhere after you've eaten there!

Is this one of the rounds of Squid Games?

Celya AB. Once all the gigs started opening up again after lockdown, I found myself on quite a few gigs with her and she's bloody brilliant. Her timing is impeccable, her writing is witty, and she's also just really good fun to hang out with backstage.

Southern Rail. If ever I've had a tough gig, the last thing you want is a rail replacement bus service back to Brighton. It's a sobering ride...

I did a gig for a law firm a few years ago (God my toes are curling just remembering this) and the man in charge first read all the names of the firm's clients who had passed away and everyone raised their glass to them. Then he went "Now we have a comedienne...I don't know anything about her as she doesn't have a Wikipedia page, but lets' see..." and that was my intro. It was horrendous - when I got home I had a cold shower to try and wash it off!

My boyfriend runs a cocktail bar, and when everything reopened after lockdown he was short of staff for a few shifts, so I helped out. It was still table service then, when I took the drinks over to one of the tables, the customers recognised me, said they were big fans and asked for a photo. However I had to keep my mask on, and so they asked me if I could stand with my head at an angle so you could see my haircut!

This is probably quite predictable, but I really love gigging in Leeds. It's just always such a fun show - plus I can go out in Call Lane afterwards!

I love a brew! I've worked out which point on my walk home from the station, is the perfect time to text my boyfriend to tell him to put the kettle on so it's ready for when I'm in. Is that sad? It is isn't it? I'm in my twenties for god's sake...

A wrinkly face from laughing. I want to physically age them - thank me later!

Fingers as long as my legs. My legs are bloody long, so to have fingers that long as well, it'd be great! I wouldn't have to get up from the sofa to make a brew, and if I did need to get up, I'd get there quick with these lanky legs!

I've been chased by a baboon before, and they're nasty little pricks. It was on a holiday - I was about 10 - and they chased me down and snatched my crisps. They're winning fights all day long.

"The thing about Louise is, she's a bit...cauliflower cheese" - a lad on the tube said that yesterday evening to his friend. What does that even mean?!