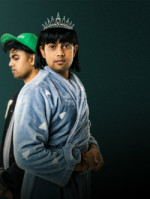 Coined as the Queen of The Gowns; The Gown is Prev Reddy’s new highly anticipated comedy special that explores Aunty Shamilla’s life over the past two years, with an insight into the “woman behind the gown.”

In character, whilst performing I asked the audience what they think a special skill of mine is and someone yelled ‘A Lord Farquad Impersonator’. I laughed for 10 minutes.

So it is my first time performing at the theatre, but not my first time to Leicester Square. When I’m there I often find myself at the Five Guys so I have no doubt that’s where I’ll be!

I feel like this is a trick question so, pass?

Who's the best upcoming performer in the country that we haven't heard of?

Definitely has, it forced me to to translate my stand up jokes into skit content. At the time, because the entire world was in a lockdown, it made me broaden the my content, so yes it was South African but the gag’s or ‘plots’ could be understood anywhere and I think that’s how we’re here today, in the UK!

Influencers.  The name, the idea behind it, the rep it’s gotten. LIKE WHAT IS IT THAT YOU ACTUALLY DO?

I was headlining a show in Ballito, South Africa. I performed to a full house of upper class rich folk who didn’t find a middle-class Indian boy funny at all.

I had a mom who’s two kids begged her to let them cut their hair like Aunty Shamilla…And she let them!

Dubai was a blast for me, it wasn’t a full show. I did an abridge version I guess but the crowd was fantastic.

With the coldest glass of G&T

Your roots should not restrict you, nor should you be ashamed of where you’re from. It’s your superpower.

Note that I will be having nightmares about these but sure, fingers as long as my legs.

I’m gonna go with the Badger! The underdog, plus look at Tom & Jerry or Tweety Bird, the little guy always wins.

That you guys called packets ‘bags’ at the supermarket.