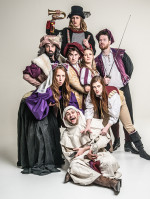 "No words can describe how enjoyable this show is. Interactive, immersive and just a downright laugh and great night out." The Upcoming

"These shows are SO much fun, a riotous night out, and an excellent bastardisation of the English curriculum. Once more unto the breach of decorum, dear friends!" London Theatre Reviews

There was an audience member in the show who sounded just like Santa every time he laughed. 'HO HO HO' The drunk was completely captivated by him and instead of the show being about two people falling in love it became a story about who was on the naughty list. The drunk sat on his knee and told Santa that they had been very good this year. We just love the fact that an audience member can change the entire course and plot in one of our shows.

Pre: China Town is next door, it would be rude not to. Post: Any establishment that serves alcohol.

Worst Question Ever. Snog Priti Patel at least she looks like she has good dental hygiene even if total dog poo comes out her mouth. Avoid Andrew Neil. KILL Piers Morgan.

He's been up and coming for the last 25 years but it would have to be our oldest member of the company John Mitton - he's not as sprightly as he used to be in his younger years but we are hopeful this year will be the one where people finally learn his name.

Everyone went a little crazy when coming out of lockdown - and our drunks were no exception - I feel like our shows for a while were even wilder. However we have tried not to incorporate it too much. We are sick of Covid. Its killed hundreds of thousands of people. So when audience come and see our shows we want them to have a bit of escapism from the world outside, at least for a couple of hours.

"We don't talk about Butlins"

We have had a few... but the funniest was after a show in Australia's Gold Coast we received a series of drunken voice messages via Facebook from a man who had fallen in love with our drunk that evening and I believe was offering her marriage so she could get an Australian passport "she's the best shit ever". Sadly our drunk decided to fly back home. Romeo and Juliet have nothing on Damien and Stacey. Kind of has a ring to it doesn't it.

There is something very special about performing drunken Shakespeare in some of the UK's most beautiful theatres... But Australia wins because of the weather... sun sea and sipping on booze!

..... this may surprise you but at Shit-faced Shakespeare we all quite like a drink.

We are all super nerdy Shakespeare fans. We trick an audience into coming to watch a drunk on stage and although they certainly see that, they also get to watch some brilliant Shakespeare that is probably closer to the way it would have been performed in Shakespeare's day. With an audience who heckle and alcohol soaked actors. The combination is spot on in our opinion.

Legs as long as your fingers is completely impractical but I love the idea of scuttling around like a crab.

I take it back this is the worst question ever... *sigh* not a badger.

Two actors having a conversation about their musical ability, " what's your range?" "oh all of them"