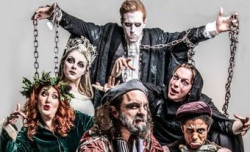 During a Pissedmas Carol show the designated drunk actress for the night was given an alcoholic beverage onstage to which one gentleman of the audience delightfully cried “down it, bitch!” The compere of the show calmly assured the aforementioned legend that “it may indeed be Dickensian London on our side of the stage, but on your side I’m pretty sure it’s still 2019 and we don’t bark at ‘bitches’ to down their drinks.” The compere then oversaw an audience applause commemorating the matriarchy before moving swiftly on with the show, after seeking the gentleman’s approval, of course. He apologised in the bar afterwards. Turns out he was a copper. More excellent PR for London MET.

On the rare occasion they run out of my favourite Chateaubriand at the Leicester Square Theatre, Chinatown is round the corner and  usually a safe bet. The theatre’s ample supplies of Minstrels and Pringles provide one’s sustenance post show, unless they’ve taken the tills - then its a hop skip and a jump to the finest fast food outlets for shame and gout. Hello, old friends.

Does the smiling Turd emoji count as a word?

Snog: Priti Patel (if my lips were laced with arsenic). Marry: Piers Morgan (if our betrothal day could parallel the events of GOT’s Red wedding). Avoid: Andrew Neil (I don’t allow politics into the bedroom).

Flat and the Curves! Google and book to see them right now!

As much as we were tempted to write a musical comedy about baking banana bread and Joe Exotic’s prison sentence we just thought the world has had enough now. Unless we could somehow incorporate a sub plot into A Pissedmas Carol whereby Scrooge has hoarded all of the remaining toilet paper in London so no one can take a sh*t at Christmas… I think Dickens would approve?

Anyone with a modicum of credibility and dignity.

We met a fan in the bar downstairs after a performance of Shitfaced Showtime’s production of Oliver with a Twist and digged his vibe so much we cast him in Alice through the cocktail Glass!   Daniel Quirke can be seen giving his Jacob Marley / Ghost of Christmas present / Mrs Fezziwig in this year’s Pissedmas Carol - who needs Spotlight when one can just recruit actors in a bar, eh? Probably less expensive than a year’s subscription!

I drink five cans of Monster and watch the Russian roulette scene from the Deer Hunter on repeat.

Legs as long as my fingers. So I could scuttle around the streets of London and get my new finger legs nice and SWOLE for conkers season.

If we’re talking Bodger versus Rafiki I think Bodger would edge it by blinding the baboon with mash potato ejaculate.

We don’t all need to hear about your hernia, Bridget!