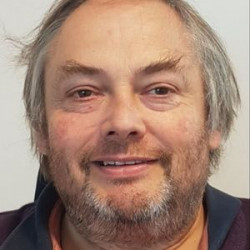 Brian Bell is that rarest of creatures – someone who LIKES to sit on the front row of comedy gigs.

The die-hard comedy fan often ends up chatting with the comedians on stage, especially since he has the sort of distinctively hearty laugh that draws their attention.

And he revels in it. ‘I’ve got to know the comics personally,’ the 62-year-old says. ‘They often spy me in the audience and say, “hello Brian” If I can get down the front, that’s perfect!’

Those encounters are why he enjoys the intimacy of the Leicester Square Theatre and, especially, its smaller sister venue, the Museum of Comedy – and why he has become a regular at both.

‘The Leicester Square Theatre is a proper theatre, but it’s small and quite intimate,’ he says. You see a good show at a reasonable price, and the location’s perfect. But I also like to meet the comedians, and that’s what’s great about the Museum. Plus you get to see comedy in its raw state.’

Brian, from Cricklewood, North London, had never been to a live comedy show until about seven years ago when, bored one night, he took the plunge. Now, he says, ‘I go to a comedy or theatre show almost every day.

‘I got more into comedy as things went on. I like to follow female comedians more than male ones… I think that’s because they’ve traditionally been the underdogs in the male-dominated business.’

Ask him his favourite comedy shows he’s seen at the Leicester Square Theatre, and he reels off quite the list. Shit Faced Shakespeare – where one member of the cast performs drunk - is at No.1.  Austentatious is another hit, as is the solo work of Rachel Parris, the musical comic who performs in that Jane Austen improv troupe. Stewart Lee, of course, and Aisling Bea, whom he’s clearly chuffed to have met after a show, slightly awed by her celebrity but delighted that she was down-to-earth (indeed a photo of them together is his social media profile picture).

Being such a regular visitor means Brian’s got to know the staff, too, and says: ‘It’s nice that people remember you. It makes you feel like you belong there.’

To wrap up our chat, I ask what his job is. ’I make up bus timetables,’ he replies; a phrase with just enough ambiguity to suggest he could be inventing wild fantasies for a quick-witted comic to pick up on. No wonder he’s so welcome on those front rows…