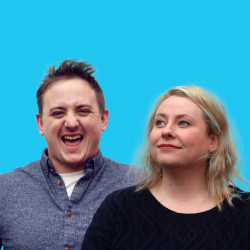 Comedian Amy Gledhill learned a lot about her craft at the Leicester Square Theatre… all from standing at the bar.

The stand-up, and half of the Delightful Sausage double act, worked at the venue after moving to London to make her career in comedy in 2013, usually behind the bar.

‘I loved working there,’ she exclaims. ‘It was so helpful because you got to watch a lot of the shows.

‘My favourite was Stewart Lee when he was practising for Comedy Vehicle. I’d get to watch him every night for months. I’d get to see him working on the same stuff and see “ooh, he’s changed that bit; ooh, the order of that’s changed, that’s interesting”.

‘My finest moment working there was when Chris Morris came to watch Stewart. The manager, was like, “I’m really sorry guys, somebody needs to stay on and keep the bar open late for Stewart Lee and Chris Morris” and I was “Please me. Let me!” I got to serve Chris Morris some Pringles. It was the highlight of my life.’

Gledhill also spent time at the theatre’s sister venue, the Museum Of Comedy. ‘Working among all the artefacts and books was a dream job,’ she recalls. ‘I was a real comedy nerd and all this stuff was really important to me. I remember selling their first ever ticket; it was to a Nick Helm show.’

As a performer, Gledhill’s fourth ever gig was at the Leicester Square Theatre, after she made the final of the Funny Women new act competition in 2012. ‘It was terrifying because I’d never heard that many people laugh at once at something I’d said,’ she recalls. ‘I remember doing the first joke and visibly recoiled because it was too much.’

The following year she was back in the auditorium for the finals of the venue’s own New Comedian Of The Year talent hunt, where she came third.

‘It’s quite a prestigious competition so I was like “I’ve absolutely made it now”,’ she says. ‘ After that competition. I thought I’d move to London. I knew exactly what to do… and that was to ask for a job at the Leicester Square Theatre. What a working-class thing to do! “Excuse me, Mister, I did well in your competition, please can I work behind the bar?”

‘They said yes and I was absolutely over the mood. I was so chuffed.’

Also in the final that year was Chris Cantrill, who would become her partner in The Delightful Sausage, the daft double act who were nominated for the Edinburgh Comedy Award in 2019 and whose Radio 2 comedy pilot aired earlier this year.

‘It’s not really important to say who placed in the top three and who didn’t,’ Cantrill jokes. ‘I remember Tom Ward saying, “I came joint 4th – with 11 other people” and that really tickled me.’

Despite the difference in ranking, the pair, who already knew each other through Cantrill’s wife, Nicola bonded at the gig. ‘We were both Northerners and because we’d met through Nicola we’d clung to each other,’ Cantrill says.

They didn’t start working together until a few years later – and were soon back at the Leicester Square Theatre for the annual Sketch Off! competition.

The day of their heat was quite an adventure. ‘We set off from Manchester at about 9am,’ Gledhill recalls. ‘Drove to London and in the evening did our six minutes then got back in my little Peugeot to head back. But the motorway was shut for about five hours. We got back to Mancehster and the sun was up and people were going to work. It must have been about 8am.’

‘If we hadn’t got through it would have been devastating,’ adds Cantrill - who to this day recalls his shock at the cost of parking in Central London.

The duo say they made invaluable links with other performers though both the competitions they took part in. ‘If you’ve gone through that competition you are in a little fraternity,’ Catrill says. ‘And the people who run it are very supportive. They are always giving opportunities to comedians.’

Gledhill adds: ‘As a sketch act, you don’t really get to perform with other sketch acts, so Sketch Off! was one of the few times we got to work with

someone doing similar stuff. A lot of people who we met through that, we’ve thought of when other opportunities come up.’

And not just people they met though performing. ‘Ibinabo Jack who was in our Radio 2 pilot and who’s in the ITV show Vera, I met working behind the bar,’ Gledhill says. ‘She was my boss. She made me wash all the glasses.’

So be aware: the next future comedy star you see at the Leicester Square Theatre may not be on its stage.