ON SALE: We are pleased to announce that @frankieboyle is returning to @lsqtheatre to try out some brand new jokes! Join us 3rd - 7th July. Book your tickets now: https://t.co/uIoEbNCE4f https://t.co/pTU3QdBfia

We can't wait to welcome @thinkingdrinks to @lsqtheatre next month! 🍺🥂 Book your tickets now and get boozy on 26th February! https://t.co/sTvcogcIYm https://t.co/MBejfIhsyp

Next to join our #leicestersquarequestionnaire... the legendary drunken cast from @shitfacedshake's Romeo and Juliet! They're heading to @lsqtheatre from 6th July! Not sure if we can provide sun and sea, but there will certainly be booze! Book tickets: https://t.co/lngPgnYheY https://t.co/9YOJKyZAUi

We're so excited to be hosting such a unique reunion for the actors of the LEGENDARY Hi-De-Hi! Join Robert Ross, Su Pollard and Jeffrey Holland as they reminisce about their love letter to the declining days of the British holiday camp. Tickets here: https://t.co/xCFhydYObV https://t.co/jNvT5D4nbh

WHAT'S ON THIS WEEK AT LEICESTER SQUARE THEATRE! A wonderful duo this week, with @ShitFacedShow concluding their run of A Pissedmas Carol, and a 42nd anniversary celebration of Hi-De-Hi with Su Pollard, and Jeffrey Holland! Tickets here: https://t.co/2GwcdCukf6 https://t.co/RYhzTwzELS 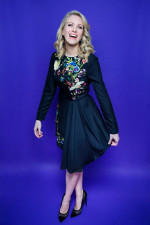 Rachel Parris was only a few months into her solo comedy career when she first played the Leicester Square Theatre – and she’s been a regular ever since.

The Mash Report star credits the venue as ‘absolutely key’ to her success: the place where she’s tried new ideas, had fun with memorable off-the-wall projects and found appreciative audiences, both for her musical stand-up and for Austentatious, the acclaimed Jane Austen-themed improv show she’s part of.

With a background in improvised comedy, Parris was spotted by a scout from the Funny Women new act competition at her very first solo gig in 2010, and made it to the final at Leicester Square Theatre, coming third. The following year, she entered the venue’s own New Comedian of the Year competition, again making the final.

Since then she has previewed every one-woman show she’s ever written at the venue, saying: ‘It has been really valuable as a home-from-home to come and try stuff, especially somewhere so central. Being in the West End, it feels like coming to the heart of showbusiness, which you don’t get performing in smaller local pubs.’

She describes the venue as almost like a secret: ‘Behind this unassuming door, you descend the stairs and you find treasure - a fantastic venue.’

As well as her solo shows, she’s been part of several fun side projects at the theatre. There was the Working Men’s Club night – an affectionate parody involving meat raffles, bingo and variety turns that she co-hosted for a couple of years – and a very memorable few nights as part of Colin Hoult’s Real Horror Show in 2012, where her roles included playing a ‘ghostly dead-eyed lounge pianist playing weird renditions of 1960s songs’ as the audience came through the foyer.

The venue was also crucial to the success of Austentatious, the team that ad-libs an entire Jane Austen story every night. The troupe had a monthly residency there from 2013 to 2107 and Parris says: ‘We were grateful for that, as we built up a good audiences, with people coming back time and time again. We even filmed our DVD there. We’ve performed at several bigger West End theatres since, but there’s nothing quite like having the same home every month - that’s not to be underestimated.’

Parris performed her last solo tour, Fun To Pretend, in the theatre in 2018, and hopes to be back soon with her next, long postponed, show. ‘It’s called

All Change Please, I wrote it two years ago, long before the pandemic, and it was all about big changes in life, like getting married.

‘But we’ve certainly all had big changes now, whether we wanted to or not, so it’s going to have to be rewritten!’