LONDON! It'll be UNBELIEVABLEFUNDON more like when you come along to our live tour finale at @lsqtheatre on Wed 10th Nov. Don't miss out - there's still a few tickets left at https://t.co/lYxrZrqGcT (Full show list: https://t.co/N681taC7gn) https://t.co/IP5jOCbhS7

Tickets for our final live show of the year with @ayishat_akanbi are now on sale. Both of our previous shows have sold out & this one will as well! Saturday 11th of December @lsqtheatre Join us! Link👇 https://t.co/mJkFhpgbeJ

For the sixth year in a row (!) we will crown the UK's best sketch comedy artist! The best acts from the Sketch Off! competition compete in the grand final for a cash prize & their own comedy showcase. It all goes down on 20th March! Tickets here: https://t.co/p936prgzXG https://t.co/YUFtbTE4Bb

Summer 2022 is gonna get lairy... @shitfacedshake are BACK! Shitfaced Shakespeare's boozy version of Romeo and Juliet runs all summer @lsqtheatre, from 6th July-8th Sept. Grab your tickets now! https://t.co/oGcNtmhyi8 https://t.co/Pltl62PDry 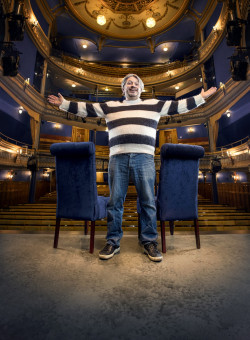 Richard Herring is intrinsically linked to the Leicester Square Theatre thanks to the podcast that bears its – and his – name. But, like most things in his career, it was a complete accident.

‘A lot of thing in the last 15 years have come through luck, rather than planning,’ he said. And that includes the phenomenal success of Richard Herring’s Leicester Square Theatre Podcast, or RHLSTP as the cool kids call it.

He started it in 2012, more than 300 episodes ago, by interviewing Tim Minchin, and since then memorable guests have included Stephen Fry, whose revelations about his mental health made national headlines, Peter Serafinowicz, who lifted the lid on filming Star Wars, and - just before lockdown in March 2020 – Michael Palin.

‘That was the first of what was to have been a run of six or seven weeks,’ Herring recalls. ‘I’m so glad we didn’t lose that one.’

The podcast grew out of the Collings and Herring podcast series he made with broadcaster Andrew Collins from 2008 to 2011. ‘At that time there was no way of making money out of podcasts,’ he said, ‘We did the occasional live podcast and people were very keen to come. We’d more or less sell out so it seemed an obvious progression [to do a regular live podcast].’

Herring had recorded some of his stand-up specials at the Leicester Square Theatre, and worked with owner Martin Witts at his previous venture, the Arts Theatre, so choice of venue was a no-brainer.

‘It’s a really good room for stand-up,’ he said of Leicester Square Theatre. ‘It’s a wide room so even the people on the back row are quite close to the action. Wherever you’re sitting it’s good. And because it’s underground, there’s a nice low ceiling and you can really get a good rolling laugh in there. The audience all feel part of it.’

Herring adds that the live audience - still a rarity in the podcast world - is a vital part of RHLSTP.

‘I’ve built up an audience who are real comedy fans; they’re not pushovers and they will listen,’ he said. ‘They also egg me on to be a bit ruder and naughtier than I might be.’

‘But they are so much a part of it in terms of putting the guest at ease. Some of the guests don’t know much about me and the line of questioning would feel a bit weird if there wasn’t an audience there enjoying it. That’s one reason they they go into areas they don’t normally go

‘With the Stephen Fry one, he was having such a nice time and there was a really nice atmosphere in there. I think he would not have opened up had the audience not been there, and he had not felt like he was among friends.

Herring also insists: ‘I’m protective of my guests, so if they’ve said something I think will get them into trouble, I’ll cut it out.’

He reveals that one guest was so drunk that the podcast has never seen the light of day, although discretion prevents him from naming names.

With the stars he can now attract – Sandra Bullock and Paul McCartney are on his wish list, and you wouldn’t be surprised if they agreed – Herring might be tempted by a larger venue.

But he says: ‘When we have massive guests - where we could have sold 2,000 tickets rather than the 400 Leicester Square Theatre holds - it made it more fun, it made it really exciting.’

Such sales weren’t always on the cards and Herring praises the theatre for allowing him to grow. ‘They were putting me on with stand-up when it wasn’t a given I was going to get an audience,’ he said. ‘They have invested their time into this, and now I’m generally being able to sell out most the time, whether there’s a “name” guest or not.’

To illustrate the point he recalls a run of his stand-up show Christ On A Bike at Leicester Square Theatre at Christmas 2010, when he had the early show and his former double-act partner Stewart Lee was in one of his many residencies there in the late slot.

‘I was getting 50 to 100 and had to then walk past Stewart’s audience snaking their way down the street,’ he said. ‘That was quite a depressing year.’

Not that he’s downcast now. ‘It’s been quite interesting to build it with my stand-up and my podcasts. I almost had to start again and build up my audience. Over those 15 years at Leicester Square Theatre, I’ve seen it all grow.’ And how!